The Igneous Rock is a rare material of very high temperature. Whilst holding the rock, it will randomly set the holder on fire. When thrown on the ground, its high temperature quickly causes a mayhem nearby, as nearby blocks start to burn, smelt and decay, entities get set on fire, etc.

The Igneous Rock comes from the Igneous Rock Ore which has a relatively small chance to spawn inside the Endstone Blobs, but is very common in the Burning Mountains biome.

In case you're lucky, you may be able to find couple pieces of Igneous Rock inside furnaces spawned inside Dungeon Towers.

The most common use for the rock would be a very efficient fuel, which will smelt 40 items in a regular furnace. It's also possible to simply throw it nearby a block you want to smelt (cobblestone, clay, sand) and it will do its job but the rock will still be destroyed in the process like if it was put into a furnace. As of Release 1.0.1, it will also instantly blow up nearby TNT. 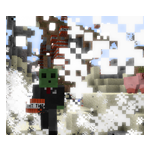